Yesterday, J.P. posted about his excitement.
A photo he took revealed a "monster" behind our house.

You probably cannot see it right away,
it is just a pattern the snow created on the trees. 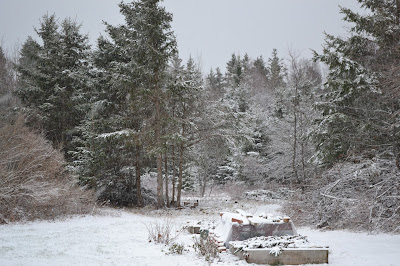 This photo kicked my brain into gear
and I immediately thought
"this is not a monster, this is a ghost-dog's face.

It is similar to recognizing "faces" on a social platform.
You get that question: "Is this XX?", just because their face detection tool
finds similarities in a photo online.
Could this be Molly's face? 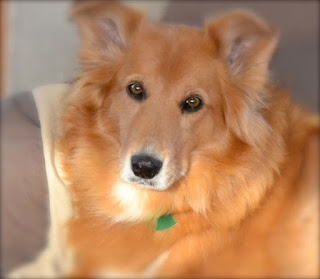 No, it could not be Molly, she is still alive.
She is not a ghost.


While I was contemplating the vision
my brain picked out the right photo.

It must be Peter's Norwegian sled-dog Liisa!

Liisa was 13 years old when she went to her eternal playgrounds.
Here - I drew a few lines to make it easier for you
to detect the "face". 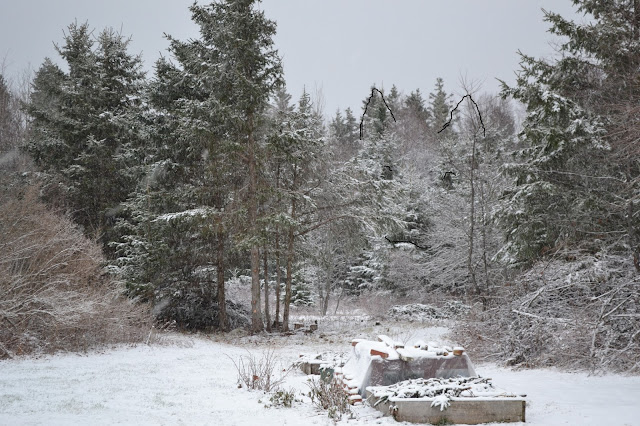 Maybe her ghost came to us for a short visit?
Maybe it is just nature playing a trick on us?
Laugh.

I wish you a Merry Christmas..


J.P.has been holed up in his "man cave" for a few days in a row
and I am not allowed to go
and have a look.
It is that time of the year, eh?


This morning he came in with an armload of wood.
No, not to feed the wood-stove.
He dumped it on the dinner table and looked at me.
Do you want to have a paint job?
There you go!
Cans with different paint and
paintbrushes were ready on the table as well.
I looked at it and at the old elf we have had sitting outside
for over 10 years,
and I decided that he needed a bunch of friends.
That's what everyone needs.
A bunch of good friends! 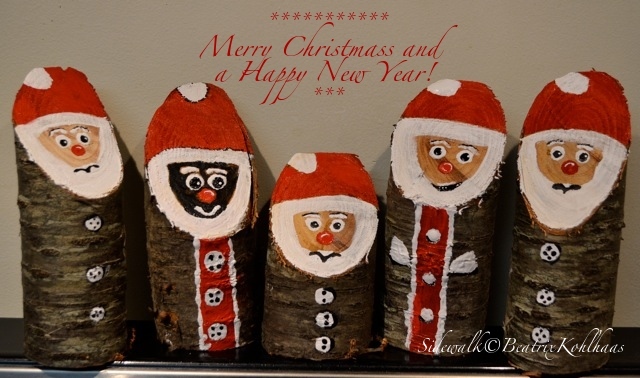 With that, I also want to thank you for your faithfulness.

Even if it is not "politically correct" ;) 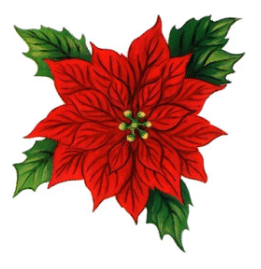 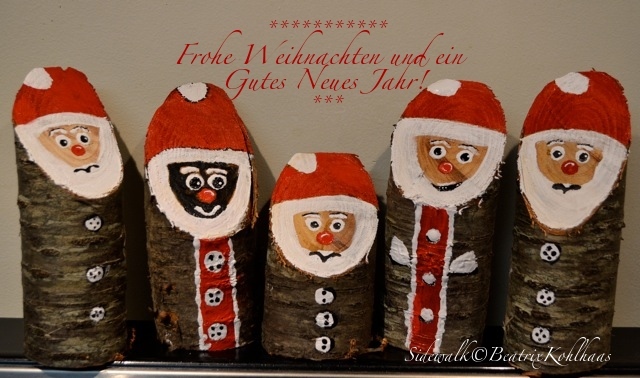 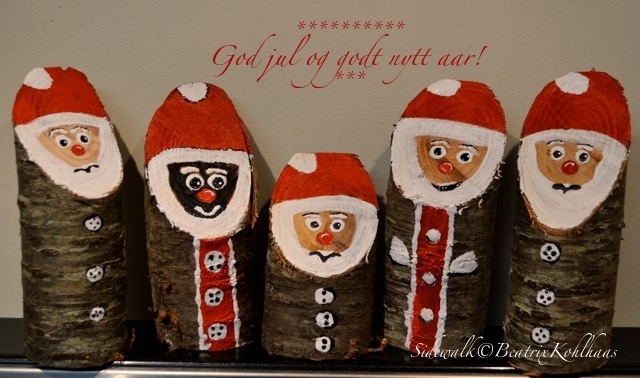 Despite the warm December weather
we are slowly getting into the mood of Christmas.
Today, J.P. went into the woods, behind our house,
to pick out a small spruce tree.
For the time being we up outside. 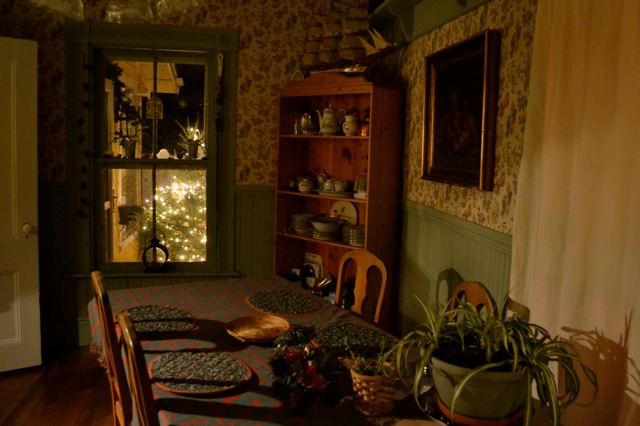 This time of the year our Norwegian furniture
remind me the most of
our log home we used to live in.
That is the reason I call this
our "Norwegian" room. 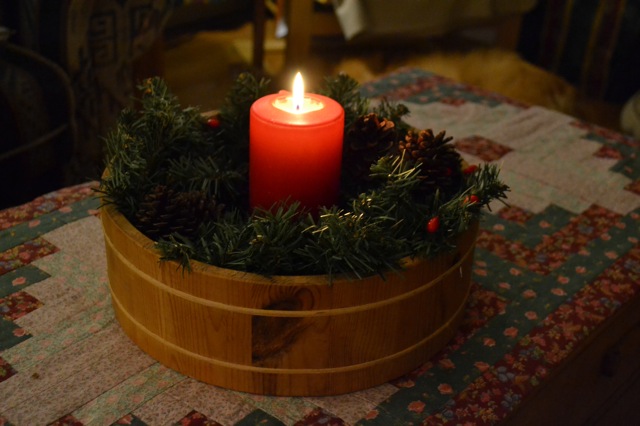 The wooden bowl was given to us
as a wedding gift and the quilt
was sown by my late mother-in-law.
So many memories
from a time and place
so far away.

“The sun set, which is everyday magic...”
― Terry Pratchett 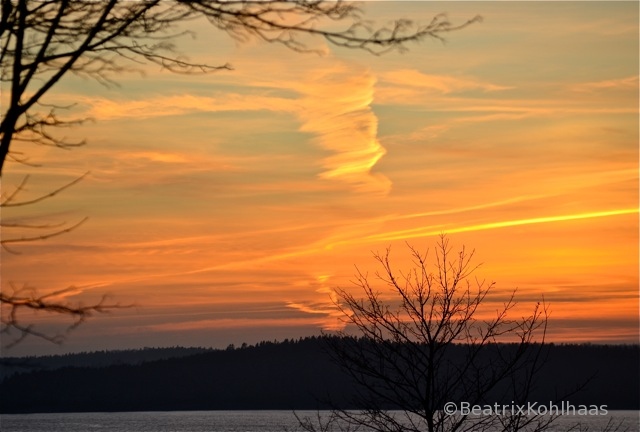 The frosty sky, like a furnace burning,
The keen air, crisp and cold,
And a sunset that splashes the clouds with gold
But my heart to summer turning.

Come back, sweet summer ! come back again !
I hate the snow,
And the icy winds that the north lands blow,
And the fall of the frozen rain.

I hate the iron ground,
And the Christmas roses,
And the sickly day that dies when it closes,
With never a song or a sound.

The Gift of a Pumpkin

There was this big orange pumpkin.

It had been part of fall decoration at a friend's house.
But as summer had come to an end they had to
close up their summer home for the winter.
As a farewell the big orange pumpkin was given to us.

I did not carve it, and for quite a while
it adorned our porch. 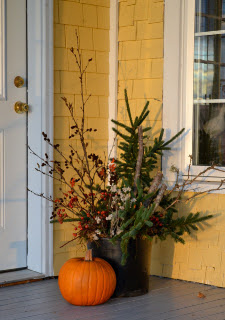 November arrived and all Halloween decorations disappeared
from the houses in our neighbourhood.
Some threw their pumpkins in the garbage,
others were trampled on and thrown into the ditch,
where they, to the days day,
are rotting.

Mine was taken inside, because,
this pumpkin is more than an ornament.

It is good food as well.

I placed the pumpkin into a cool, dark room
where it could have stayed until February, maybe even March.
They store very well. 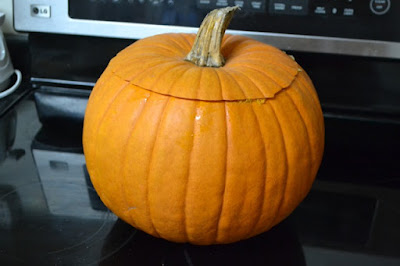 Today though, the house quiet and undisturbed, I decided
now was the perfect time to cook it.
I cut it in half, roasted it in the oven until tender and filled
half the jars with pumpkin flesh for soups or vegetable stews.
Another portion was seasoned for pie filling
and canned as well.
The seeds were seasoned with salt and herbs and roasted.
Mixed with nuts and chocolate chips they make a tasty snack. 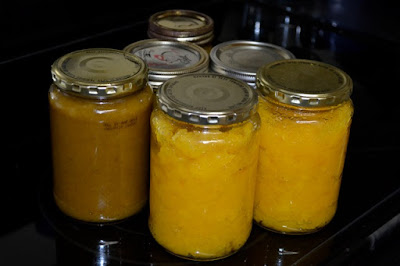 The leftovers went to my compost bin.
In due time they will be turned into soil together with all
the other scraps from my kitchen.
The soil will be used as food for my vegetables.

This way the circle has comes to an end.
Food produced from good soil
utilized to feed people, and to grow fresh vegetables.

It feels good that nothing got wasted.

Thanks again to the friend who shared
this pumpkin with us.
Posted by Bea at 12:49 PM 1 comment:

November, already a thing of the past.
Its last days were rather on the chilly side,
down to 15°F (-10°C),
grey and windy.
There was no way that I was going to stay outside
for a prolonged time.

One of the favourite things we did, when staying in the desert of California,
was getting together and do a puzzle.
No desert here, no friends either, that is too bad.

On the good side: I had a puzzle at hand. 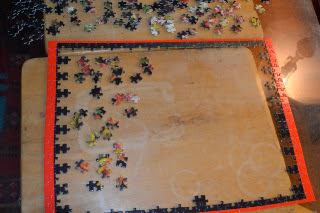 This time it was a 500 piece "Still-life" of flowers and fruit.
The sun had already faded the picture on the container.
Red had turned to purple, yellow to white and green to a bluish tint. 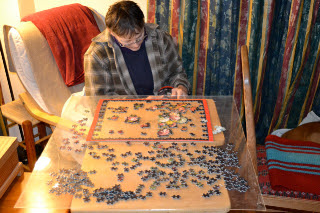 It took me two afternoons in deep concentration
to get it done. There! 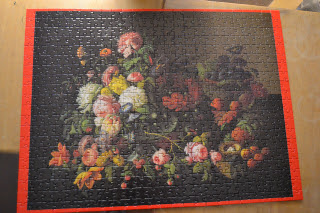 Maybe my brain is still working as it should.
That is good.
Because, sometimes I am in doubt about it.
Things seem so easily forgotten
in a mere moment.
*
Today, on the first day of December,
the temperatures were on the rise again,
the sun was out.
On the windowsill
another project looks promising. 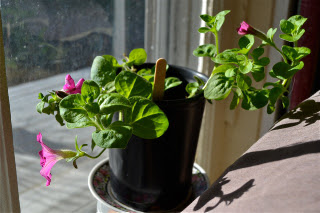 It was in August when I took cuttings of various petunias.
Some of them made it until now.
Pretty flowers. 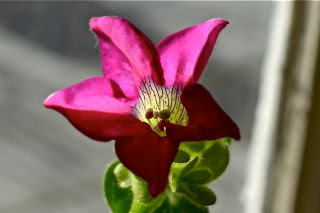